Christmas Malinovka - a cautionary story for children and others


I met the most beautiful robin in the world on November 4 this year by the bridge at the end of the millpond. From that day we have been close friends. He poses for me in a most impressive manner. He is a natural. Of course being friends I share my food with him. 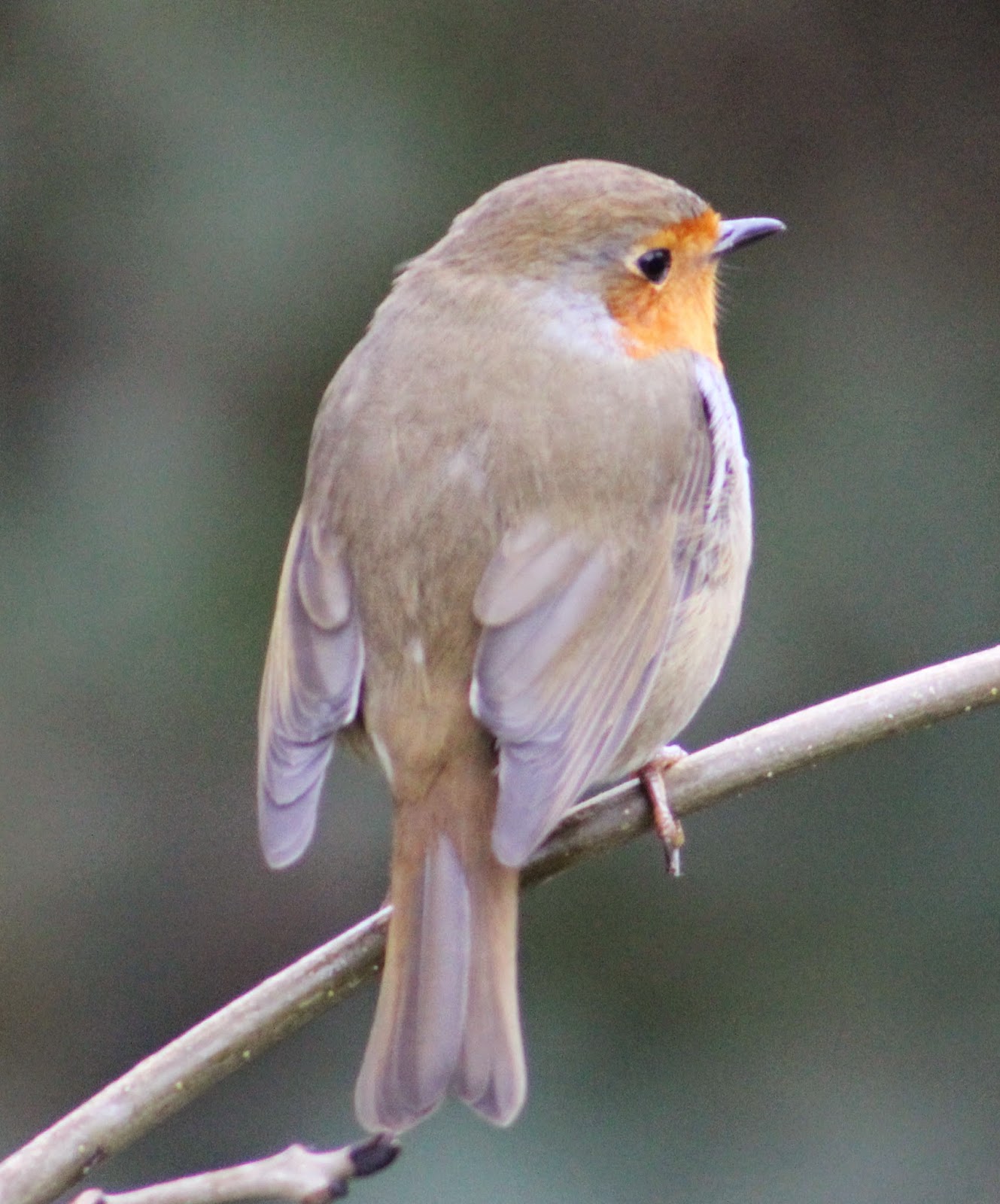 In return he sings for me the most melodious tunes, the most tuneful melodies. He perches high on a bough among the ivy and serenades me at the top of his voice. 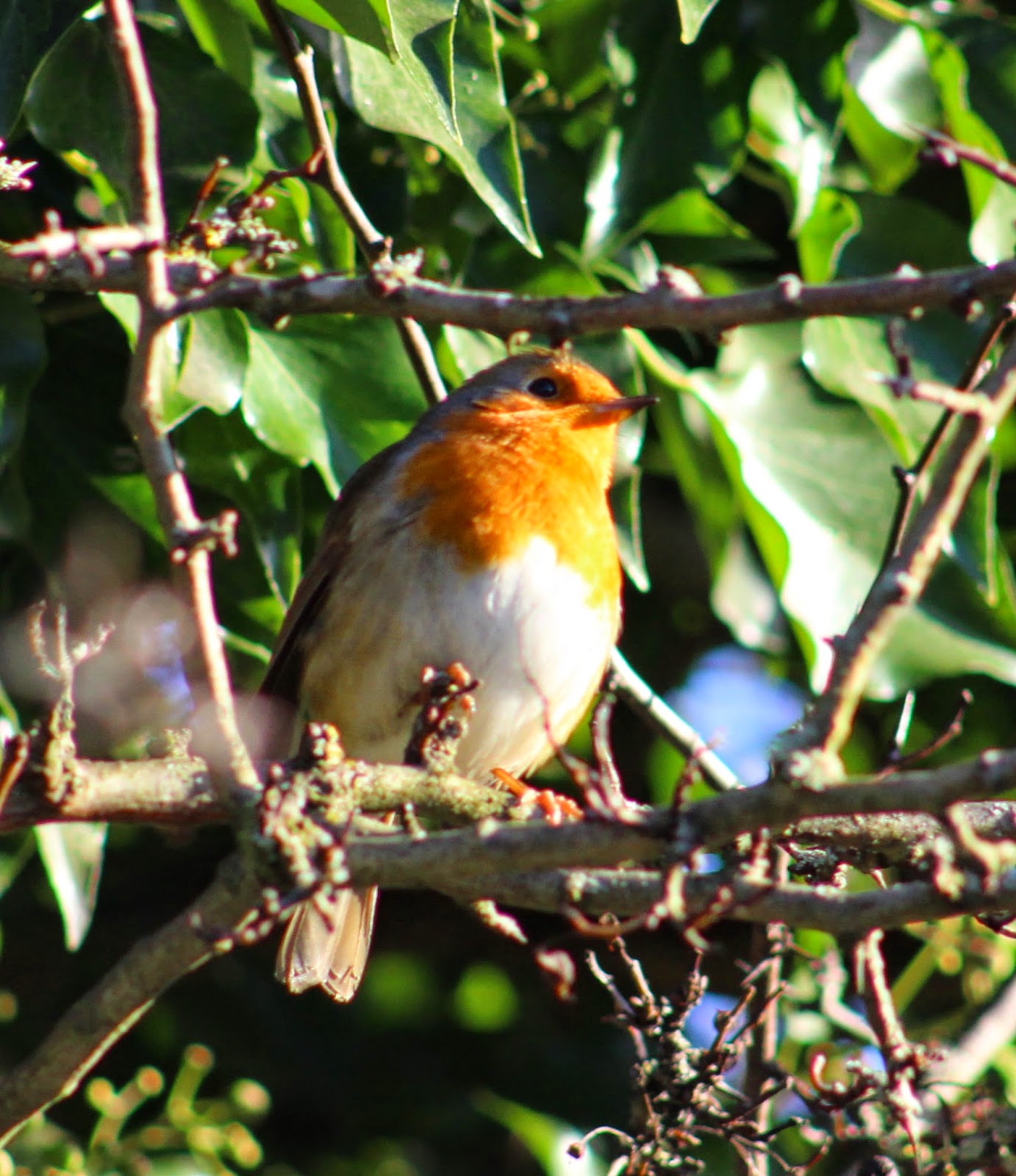 I try to whistle Carly Simon's "Robin" and I think he has started recognising me by these unaccomplished efforts. Anyway as our friendship grew he became more and more adventurous. One day I saw Malinovka by the foot of a large oak tree. He had come to meet me. Perhaps he recognised my two dogs, Max and Tyson. 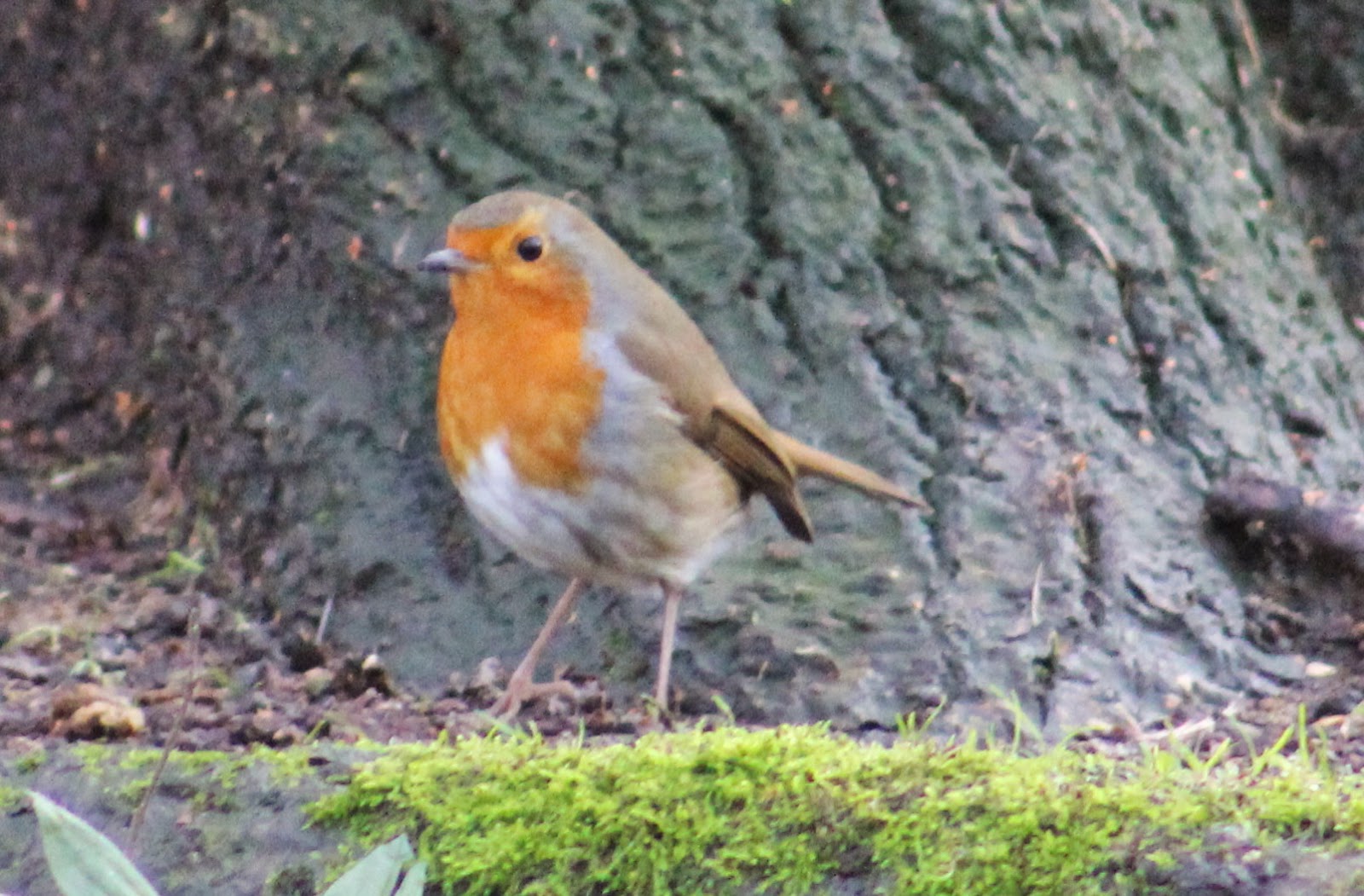 What goes through a robin's mind is anyone's guess but I suspect the reason had something to do with uninvited guests joining us at our table. There was this chappie for instance who sang to me "Oh, isn't that a dainty dish to set before a king?" 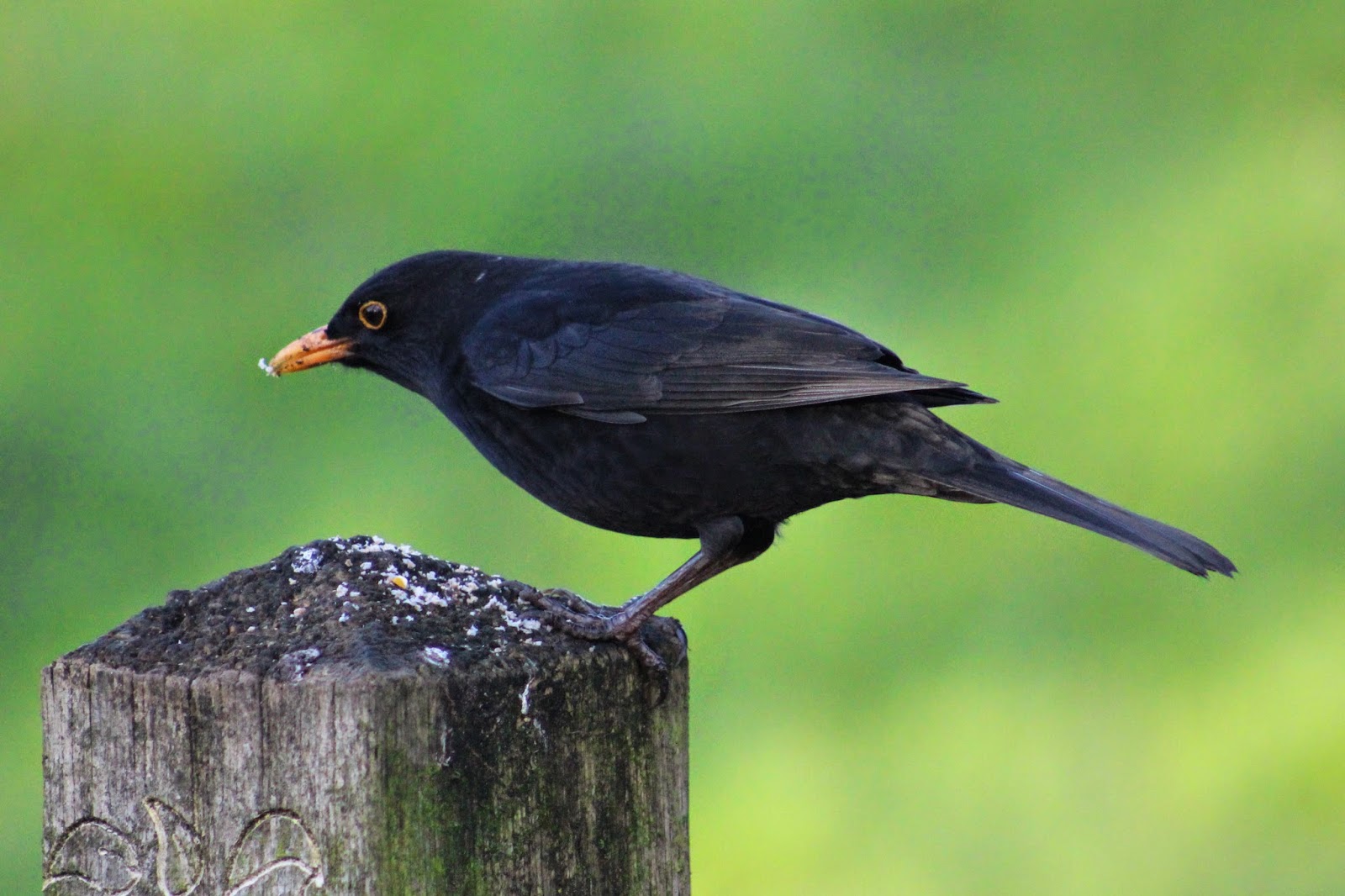 He was not the only one. Soon all the birds in the neighbourhood had seen that here was a table of plenty, manna from earth, and I was their meal ticket. Malinovka, being small, could not compete with the big birds. He was scared of them. Wood pigeons, in their own way, are pretty and colourful characters but when two of them are feasting at a small table there's not much room for a robin. And not much food left when they've finished. 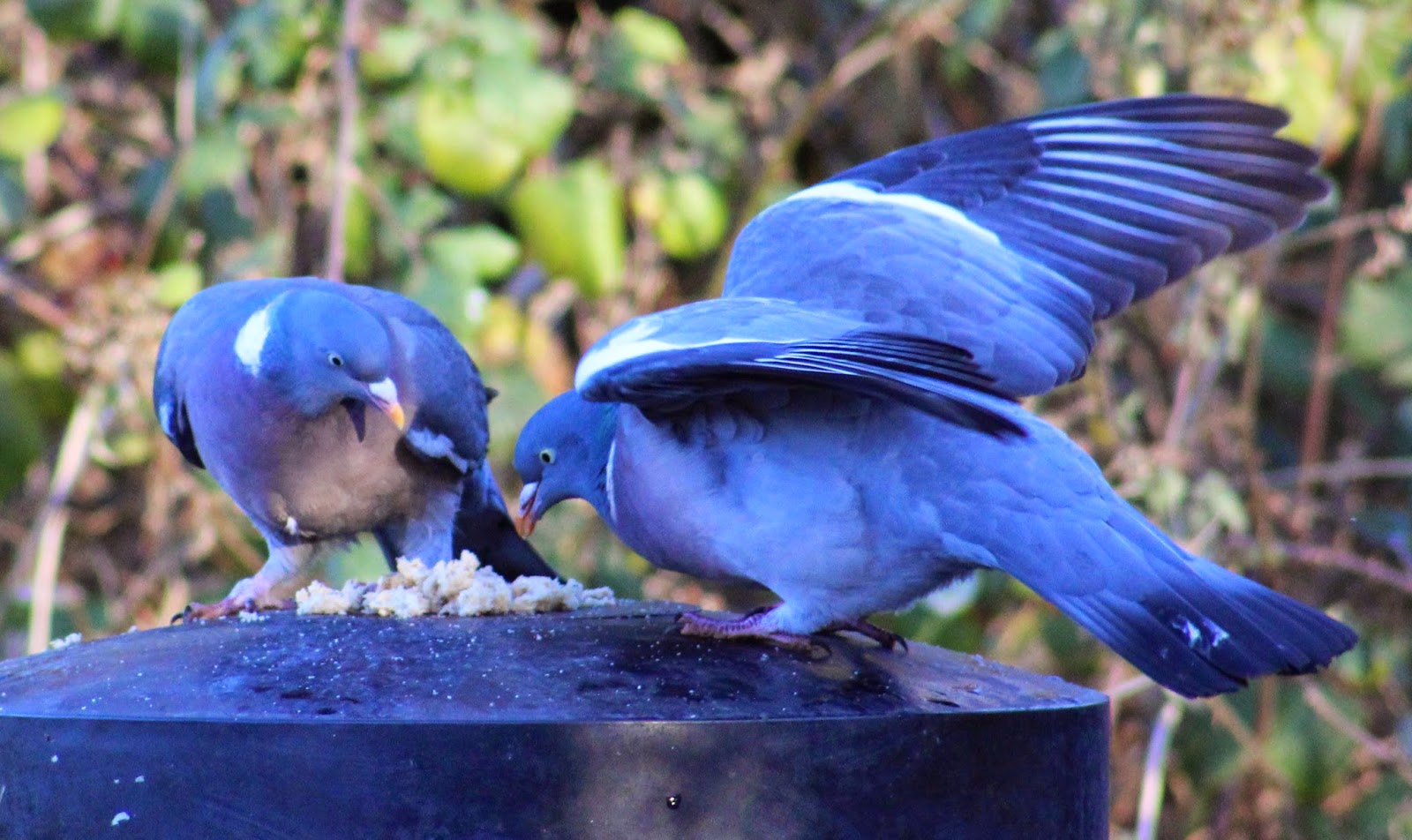 So we had to find different tables on which to share our meal together. That called for imagination. To begin with we tried one of the red lifebelt stations positioned around the millpond. Malinovka quite liked that for a little while. Unfortunately it was not ideal because the surface lacked width and food kept falling off. So eventually we gave it a miss. 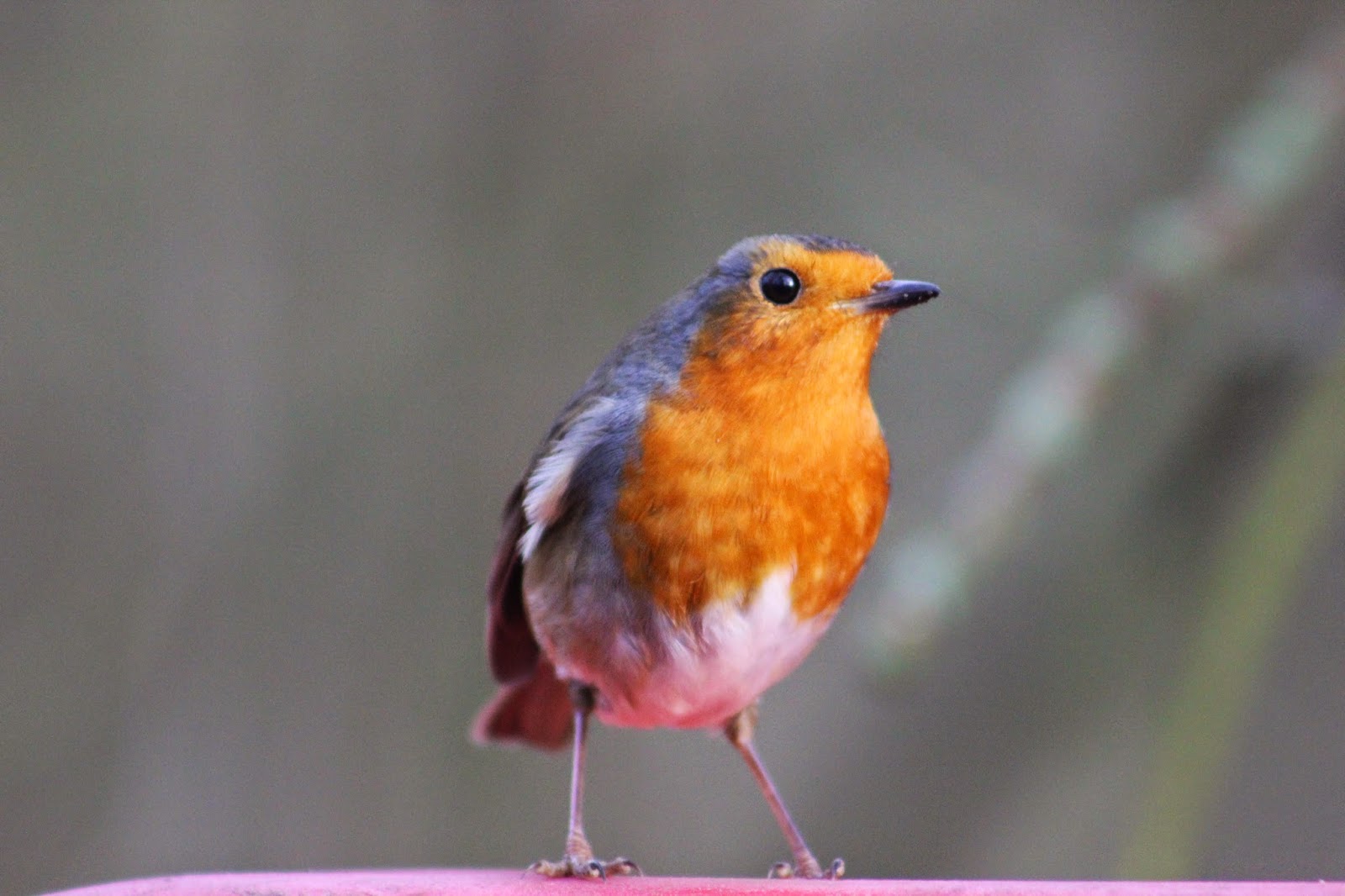 Apart from one day when workers were repairing part of the bridge Malinovka was there every day. He would suddenly appear from nowhere. Being the most beautiful robin in the world my heart would jump for joy when he surprised me with his presence. There are of course other robins, this one for example. 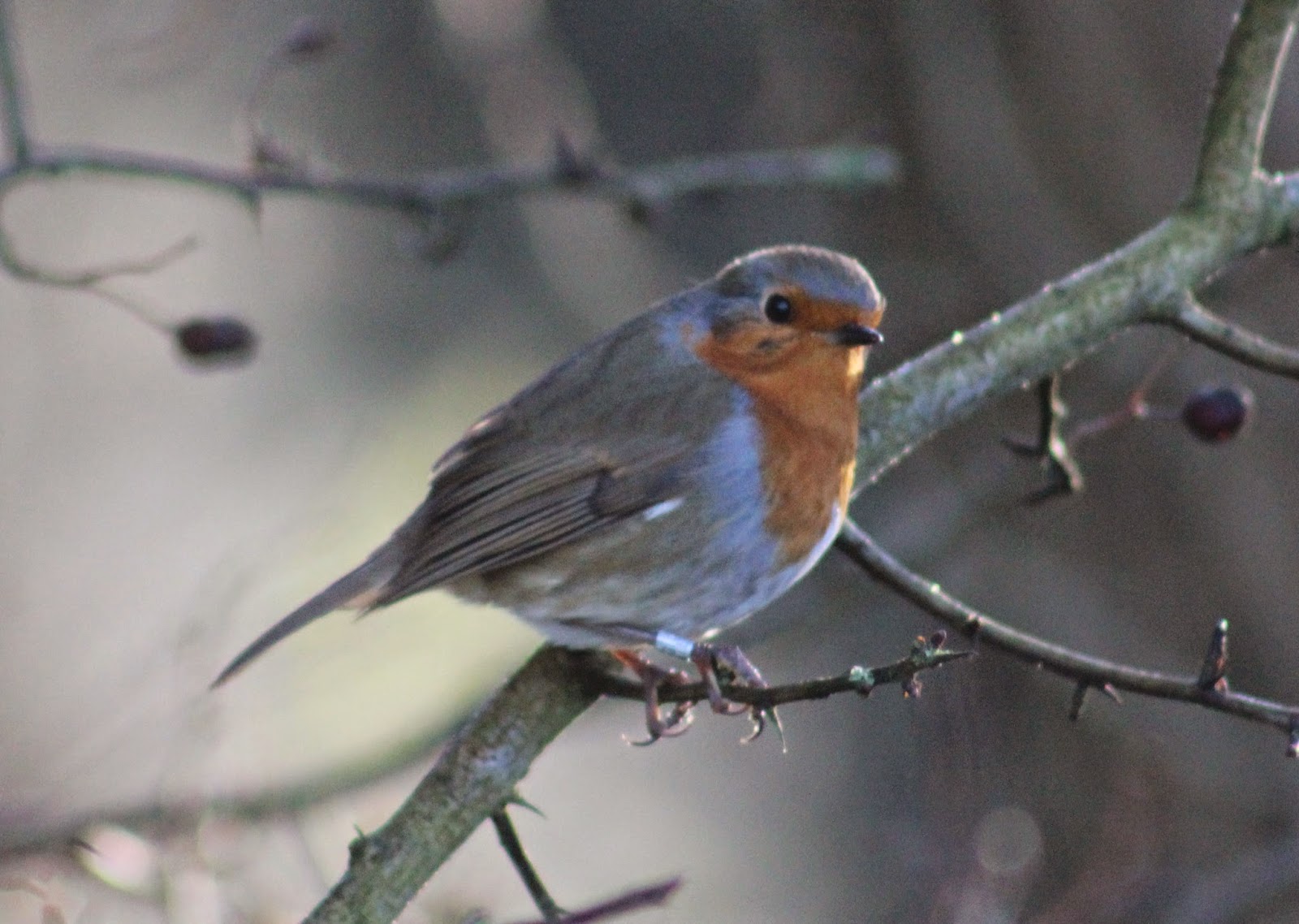 You might notice he is wearing a tag. I asked Malinovka what he had done wrong. Apparently he had done nothing wrong. These policemen turned up one day and threw the police net over him. Next thing he's wearing this electronic tag. They told him it was to keep track of his movements. It is sad to have your God-given freedom taken away like that. They'll be issuing bird passports next. 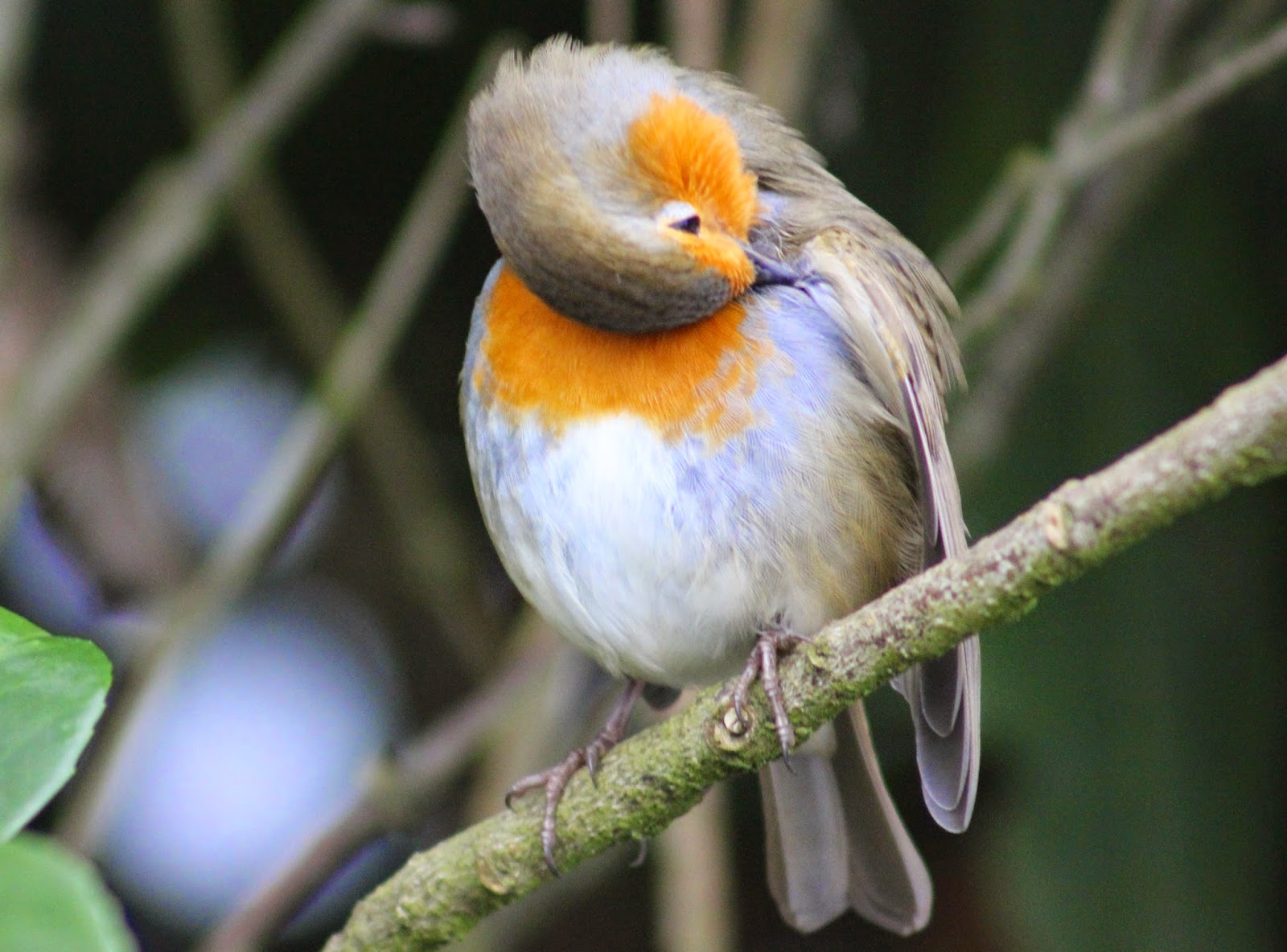 When you are the most beautiful robin in the world you have to keep up appearances. Here is Malinovka preening himself. I think that was the same day that he led me to a manhole cover which was a proper-sized table from which to eat. With it being on the ground I worried about my dogs, and Tyson did take a fancy to some of the bread pieces I put down until I reprimanded him. Anybody would think they were not fed at home. 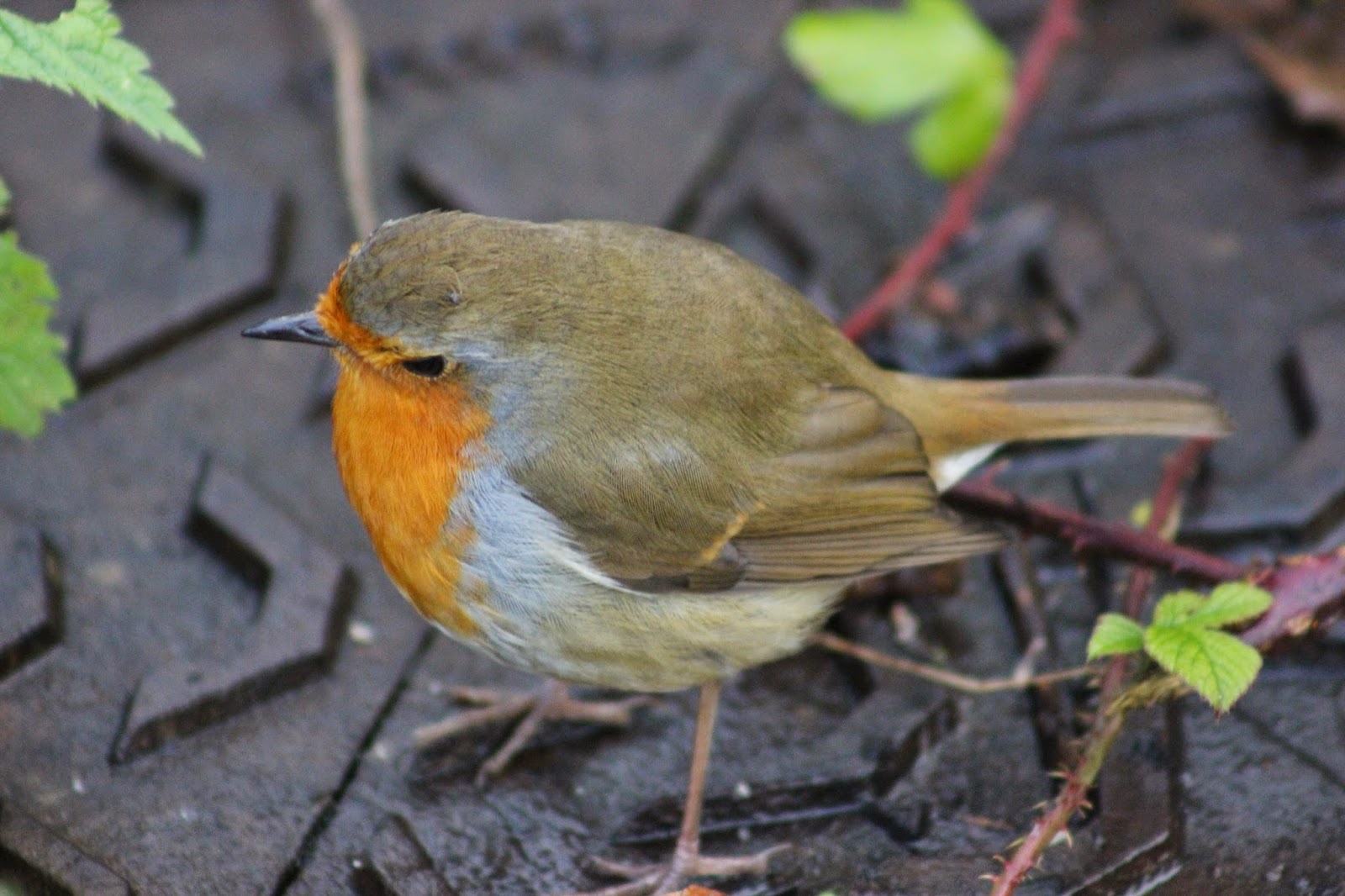 Malinovka likes the laurel shrubs and showed me this tree-stump by the side of the path. It was a good place. Often when other people come along the robin disappears. Malinovka is not a fussy eater so I feed him bread and seeds, but in the summer I think he likes grubs and things that the French might pop in their mouths. 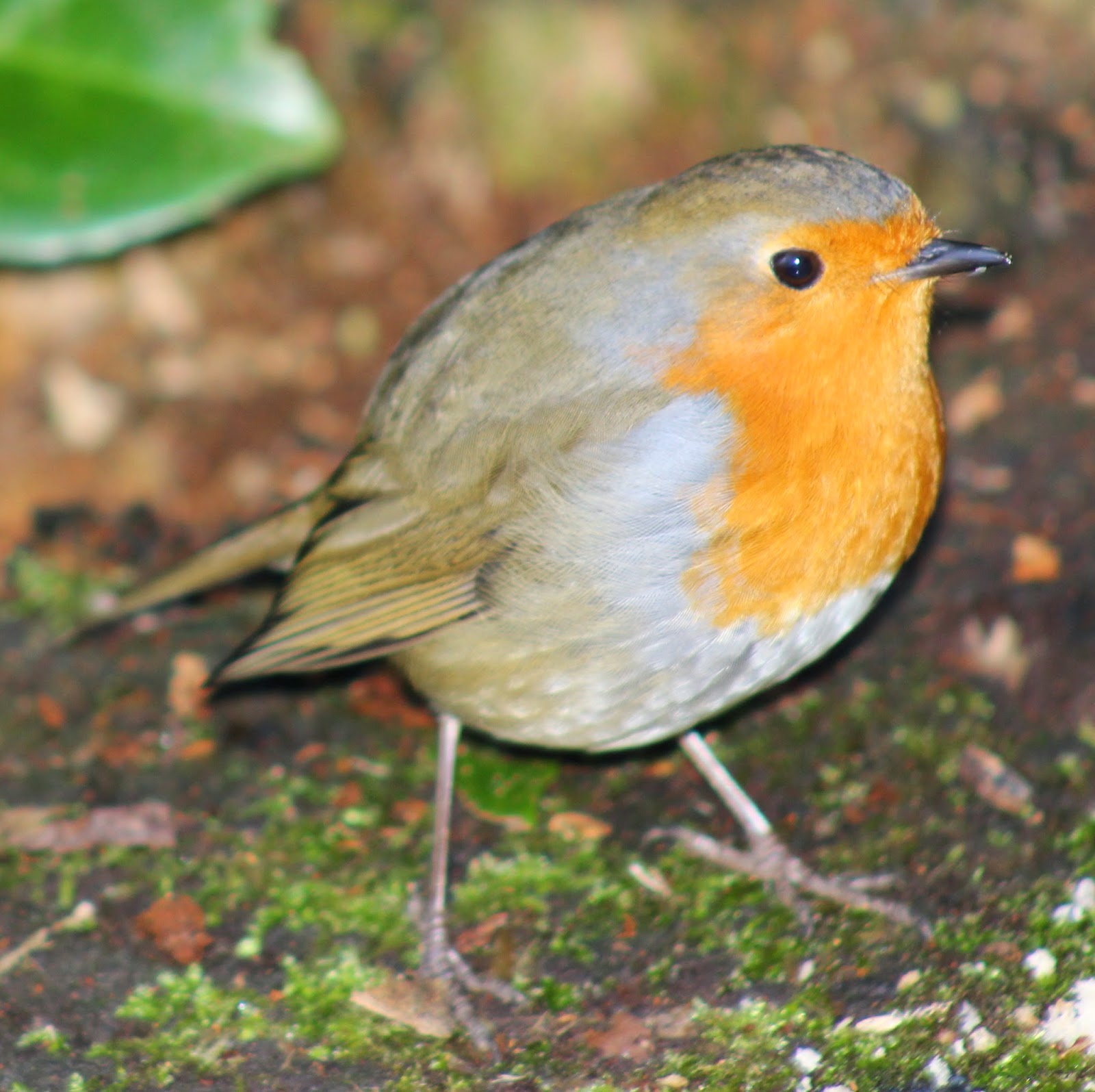 So we settled mostly on this tree-stump and the manhole cover as tables. Two days ago something quite frightening happened as I was putting down food for Malinovka. I stood back and took a shot or two. Here is one of the pictures. So cute. 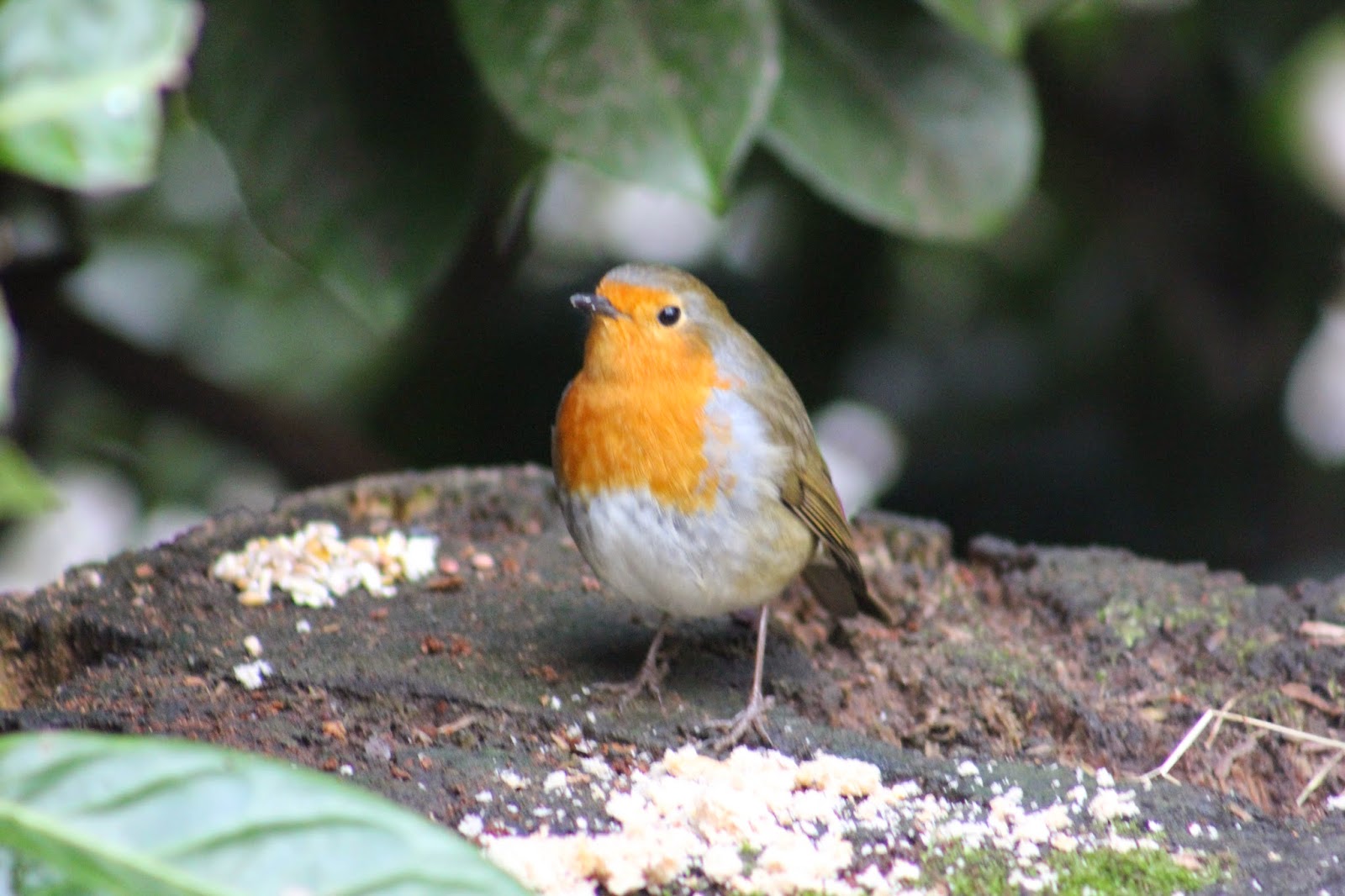 Suddenly, from nowhere, this great galumphing and slobbering hound was on our table suctioning up everything, pieces of bread and seeds. I had no idea what had happened to Malinovka. The wood pigeons were bad enough but this is something you just don't want. The manhole cover is some two hundred yards from the tree-stump but when I got there there was no sign of Malinovka. If he had escaped he had fallen out with me. Because that is where we part and say "Goodbye". 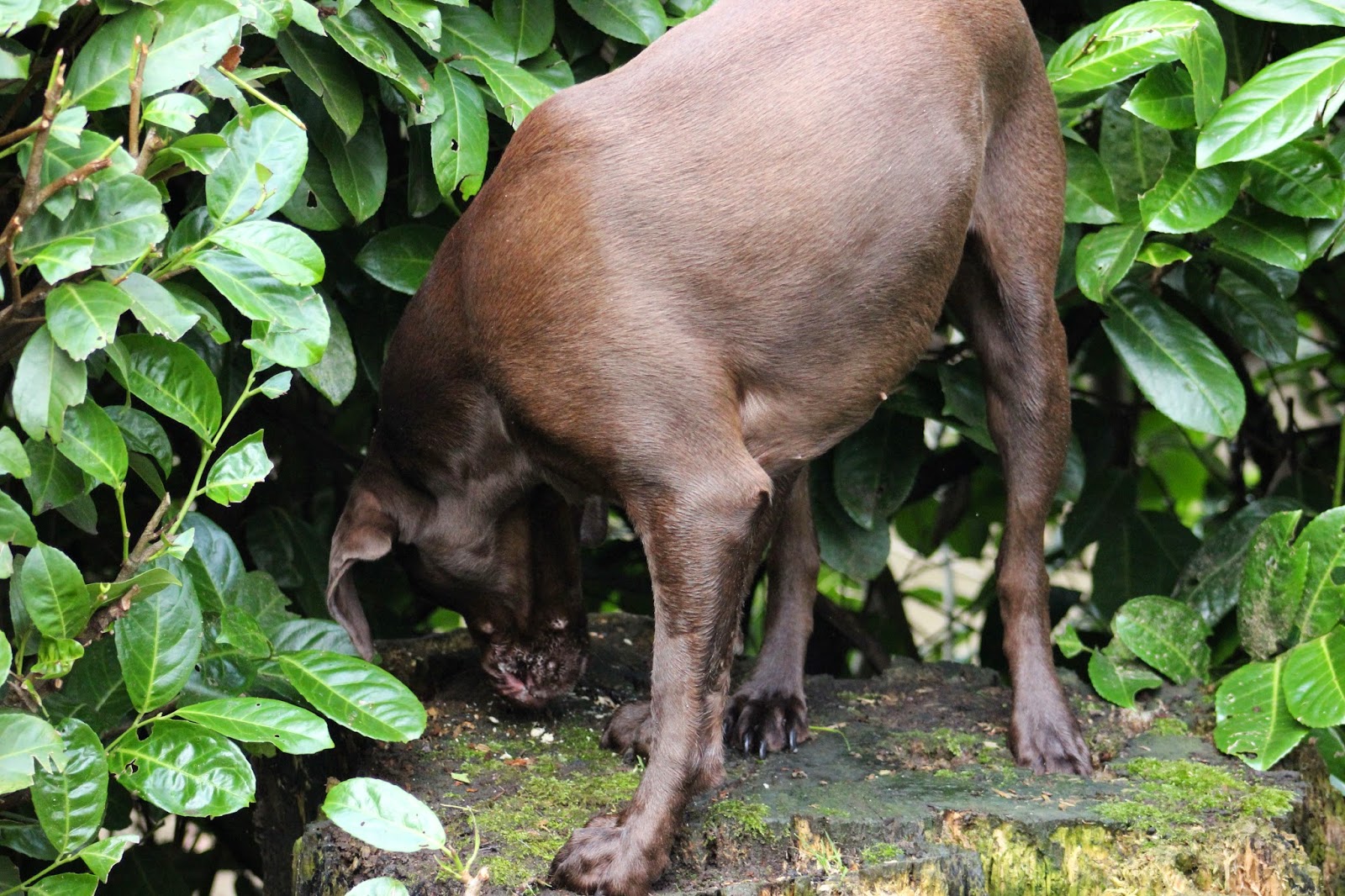 I could not sleep properly that night. If Malinovka had escaped he must have felt betrayed that I had not been able to protect him from that alien dog. To a little thing like a robin it must have seemed the size of a killer-whale pouncing onto the table and thoroughly cleaning it in seconds. 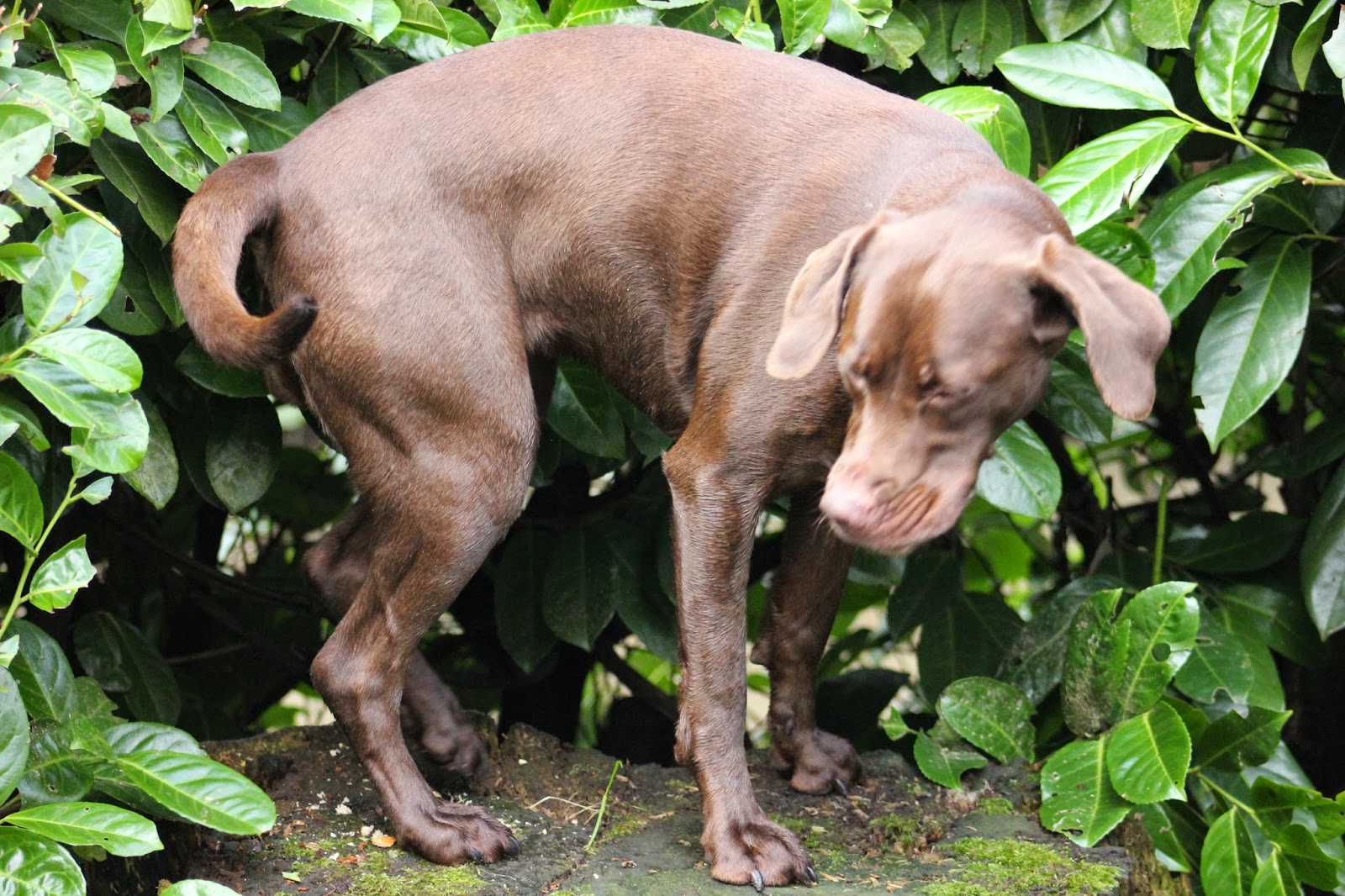 The next day was quite windy and all the birds had taken shelter except for the wood-pigeons I went to all our favourite eating places, whistling Carly Simon's "Robin" but nothing. He was not around. Today the wind had eased and there was more wildlife in the hedgerows and trees. I even managed to get a picture of a wren, another Christmas favourite. 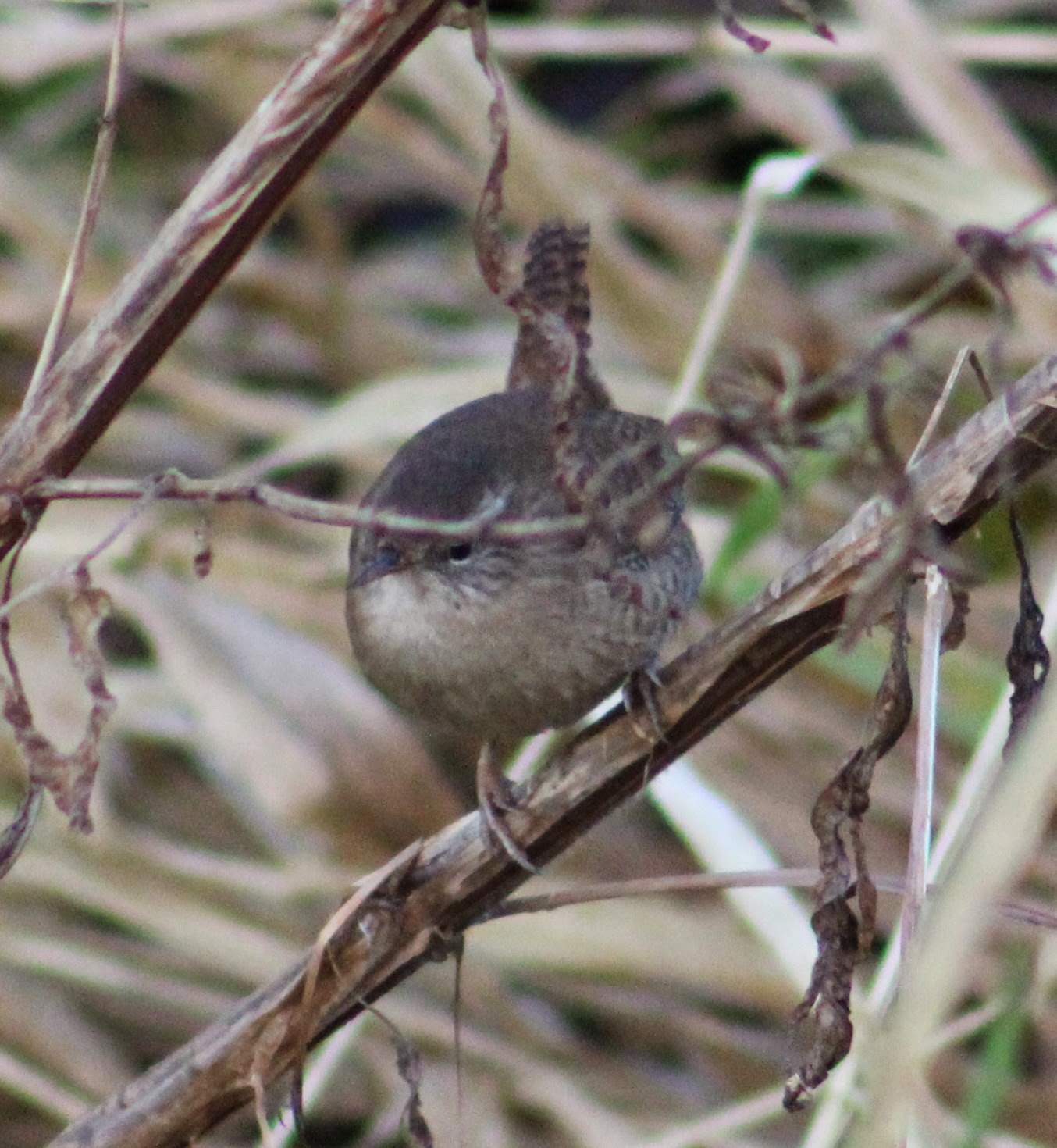 When I got to the manhole cover I looked for Malinovka but could not see him. I feared he might never again follow me on my walks. What made me turn round I just don't know, perhaps it was a bird-call among all the other bird calls. There on a dead branch of burdock was Malinovka, beautiful as ever, as if the events of two days ago had never happened. 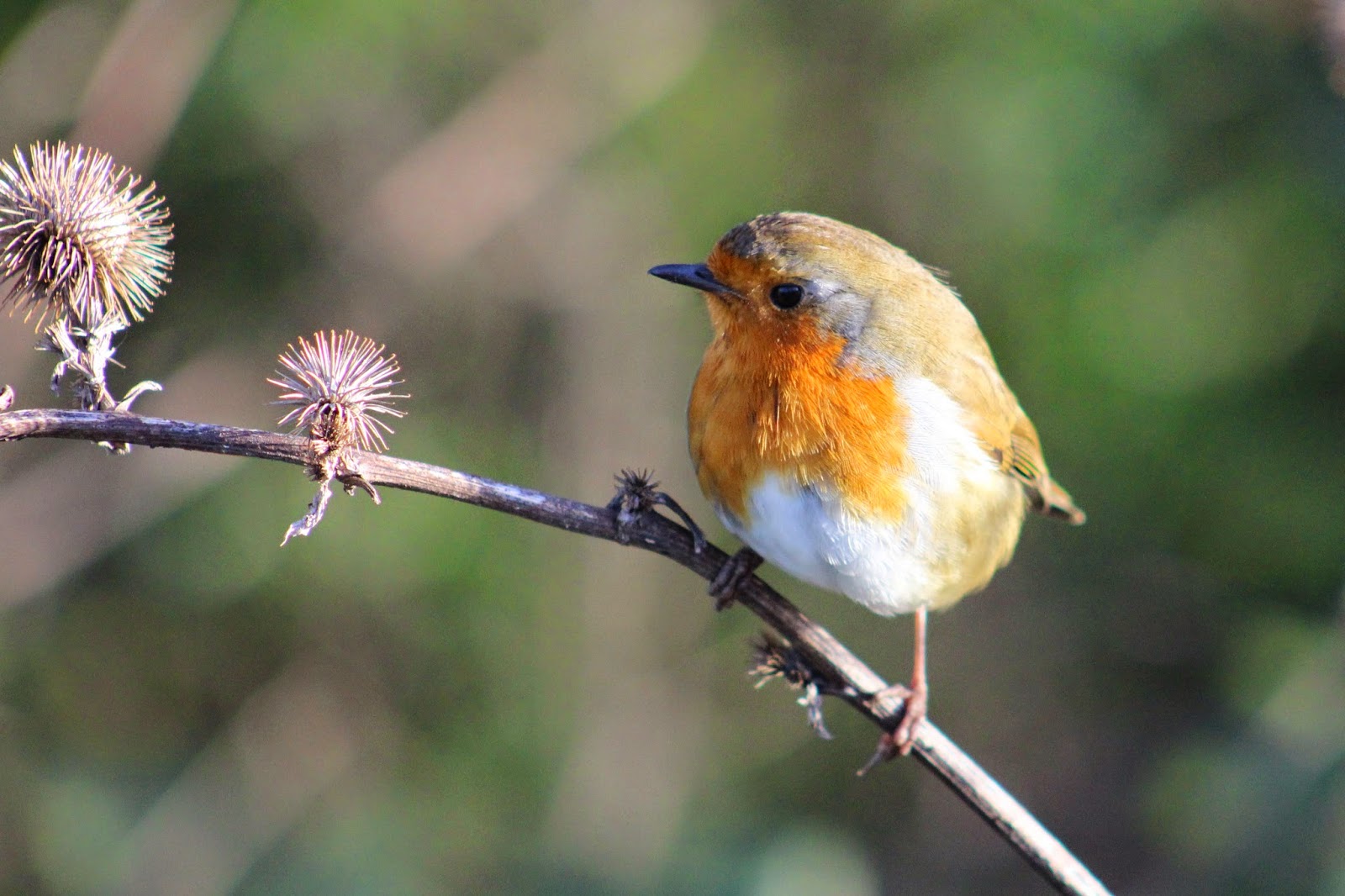 Take care if you feed the small birds that there are no ravenous animals around likely to steal their food and scare the little creatures to death. Then you can rest assured that Malinovka will be around on Christmas Day having a happy Christmas which is what the two of us wish you all. Happy Christmas!
Posted by truegoss at 14:22 No comments: